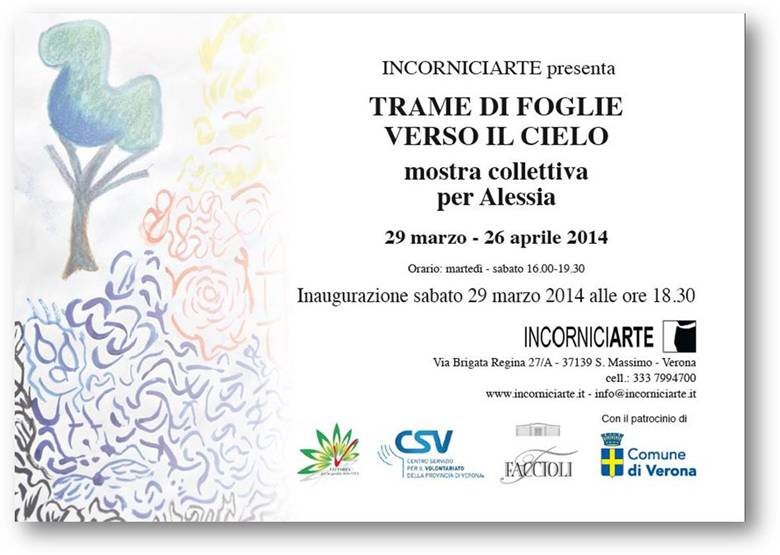 Tiziana and Mario want to remember her daughter Alessia with the collective exhibition of painting and photography ” Textures of leaves to the sky .” The works on display , taking a cue from a phrase of Alessia : “Freedom is a journey without a trail ,” have as its theme the nature that juts out into the sky in a yearning for freedom .

Tree roots , is ground , it is the branches ; the roots are the links with the land, the people , the branches that jut into the sky are the relationships to others , especially to those who suffer.

The disease that took away too soon Alessia continues to affect , the memory can become tangible and then turn into a real help for those who suffer.”

Part of the proceeds of the sale of the works on display will be donated :

– Associazione Onlus San Antonio – www.associazionesanantonio.it – to support the project of free home care to patients suffering from lung cancer is not self-sufficient , in addition to specific therapies against cancer , it can then follow the phase of the ” Palliative Care ” which has a certain dignity is not less than the anti-tumor therapy . Paradoxically, this is the most challenging phase , in which you have to pass by the ” cure for cancer ” to the ” care of the person , his anxieties , his sorrows” ; never as in this moment becomes critical “continuity and humanization of care ” ;

– Sister Sara Antonini , Comboni missionary who works as a physician in Nzara , in the region of Western Equatoria in South Sudan , in a facility for the treatment of tuberculosis and leprosy. Its activity is dedicated in particular to the care of children suffering from severe respiratory infections , common especially among children.